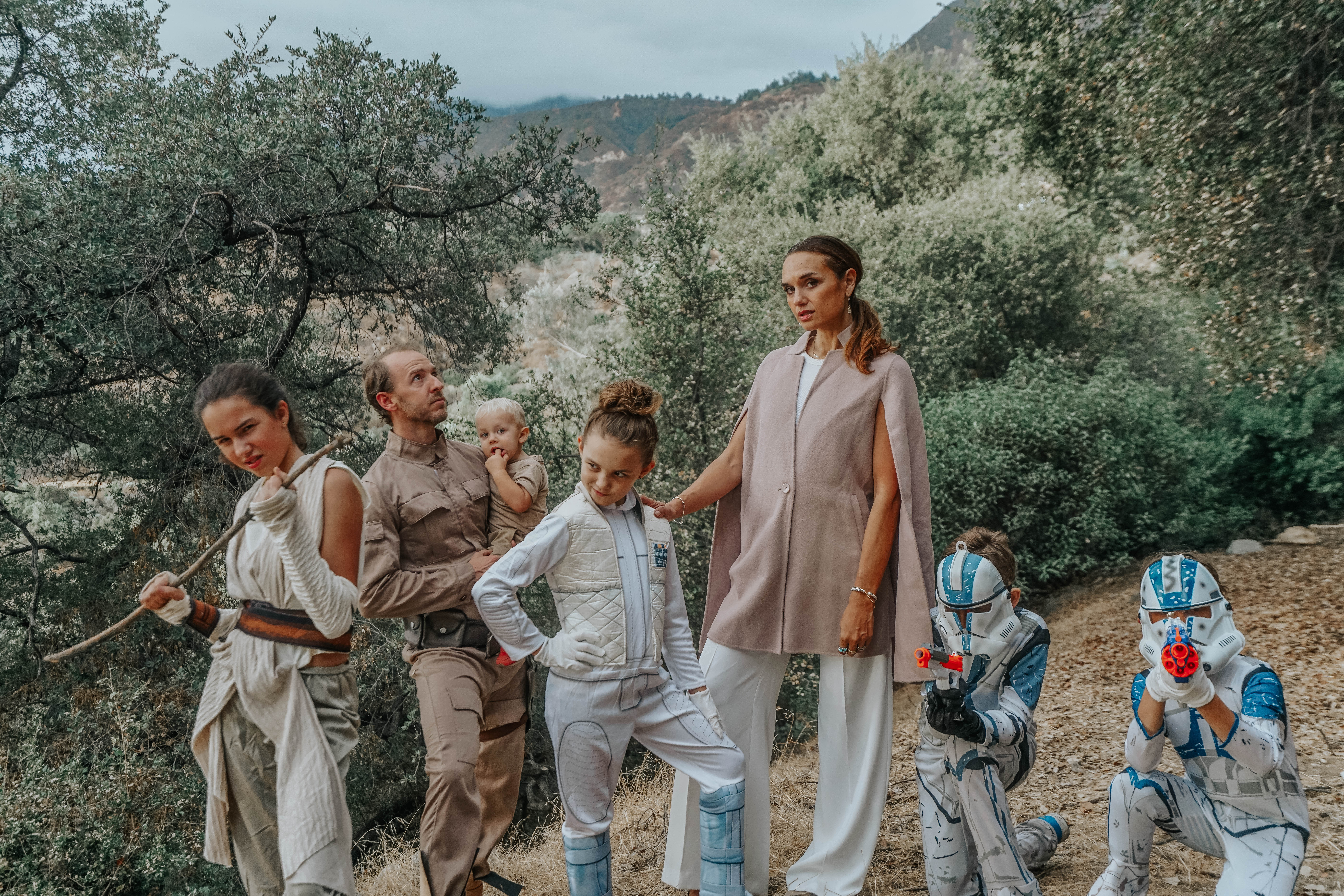 It is no surprise, the kids chose Star Wars for Halloween this year. Their slight obsession with the movies and characters, led us to climb our hill, don our characters and attack the clones!! While I don’t recommend wearing white pants and sandals on the side of a mountain, do dress us and enjoy the family time. See our aviator halloween here, bat and fairies, lifeguards and sharks, and batman and catwoman.

Hope you had a good weekend, it went way too fast! 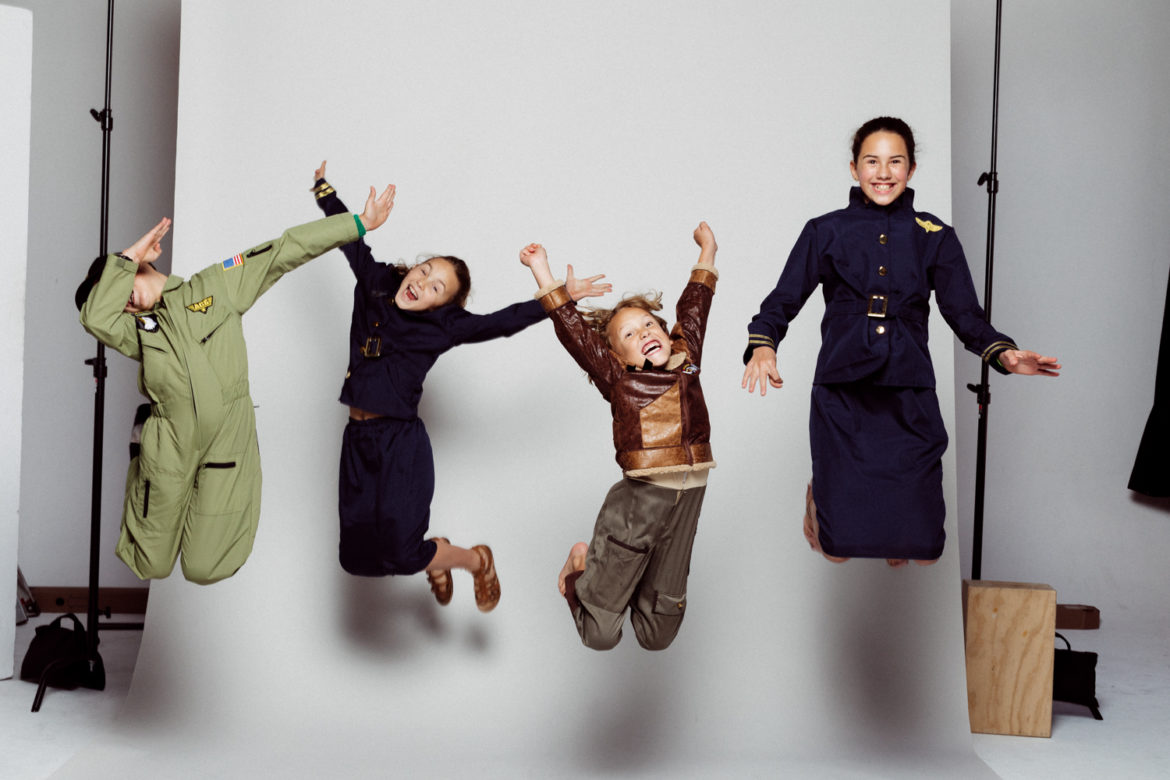 My shirt // My pencil skirt // My pumps // Brook’s costume from Costco.

Every September we rack our brains over WHAT to be for Halloween. It’s a big deal around here and with a group of seven, the pressure is on to keep everyone happy. Getting it all together is much harder than it looks but the real complexity is keeping it simple.

This year, like most, we went back and forth—should we be a family of bees, a box of illegal plastic straws or just give up and go in our pajamas? As we brainstorm and talk ourselves out of any costumes that involve sewing we usually hit the enlightenment.

Then, Brooks—my 6-year-old—came back from a Costco run with daddy and announced he REALLY WANTED the pilot uniform at Costco. So much so that he would use his own money. Wow. So, the next day I brought the fam to Costco to see what the hype was. He was right on, it was a cool uniform with a semi-real looking leather aviator jacket. SOLD. I whipped out the Visa, threw some berries in the cart to snack on for the painfully long line and just like that, we started creating our Halloween family theme on the way home.

So thanks to Brooks’ find, we found ourselves an aviation theme. That my friends is how it’s done. No rhyme or reason or far-out planning… it was really just impulse. I went on to order stewardess uniforms for the girls, another fighter jet costume for the boys and Reid pulled together a baggage handler costume thanks to Amazon. Hilarious. My dad, a retired pilot, I think would be proud.

Which is your favorite look? 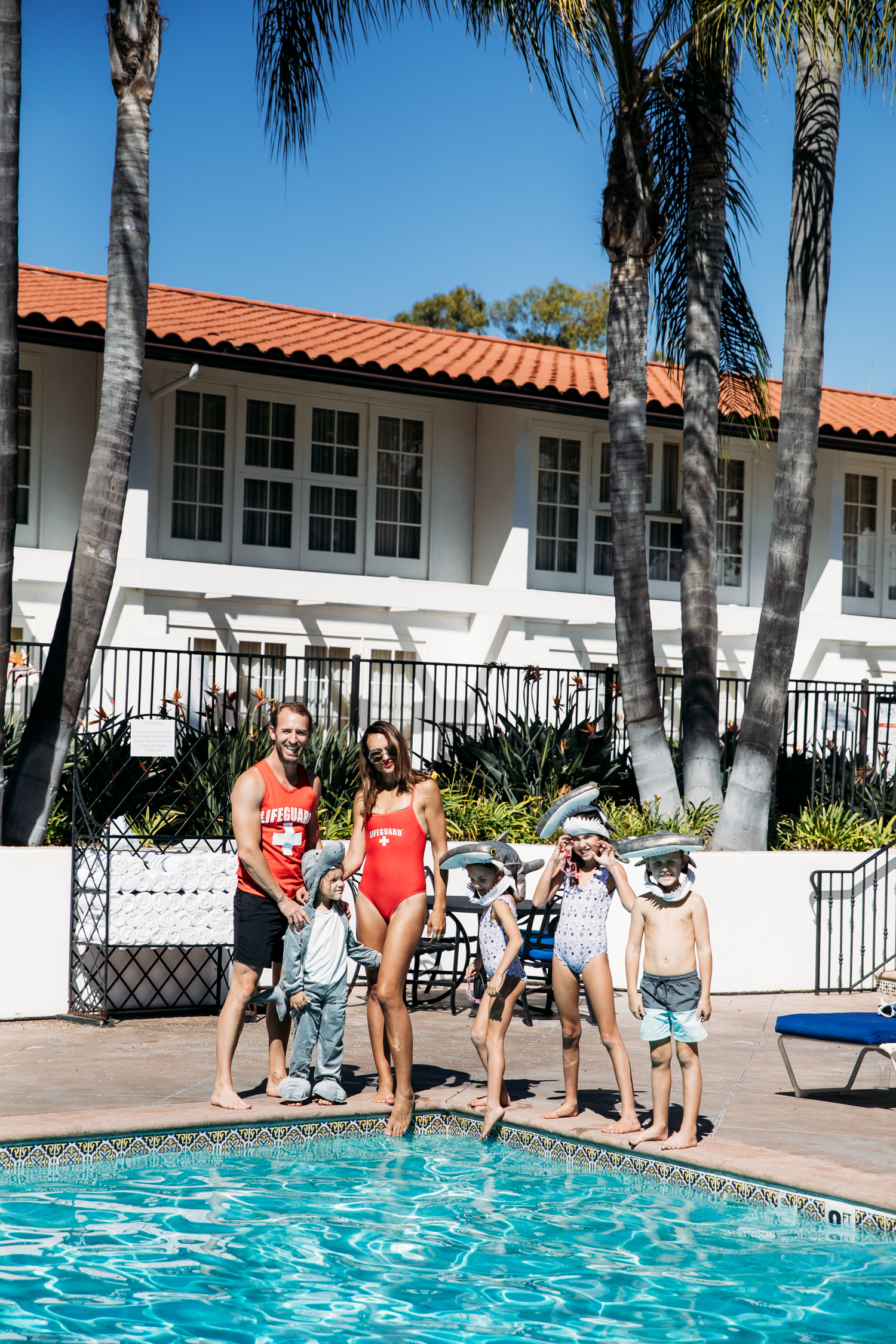 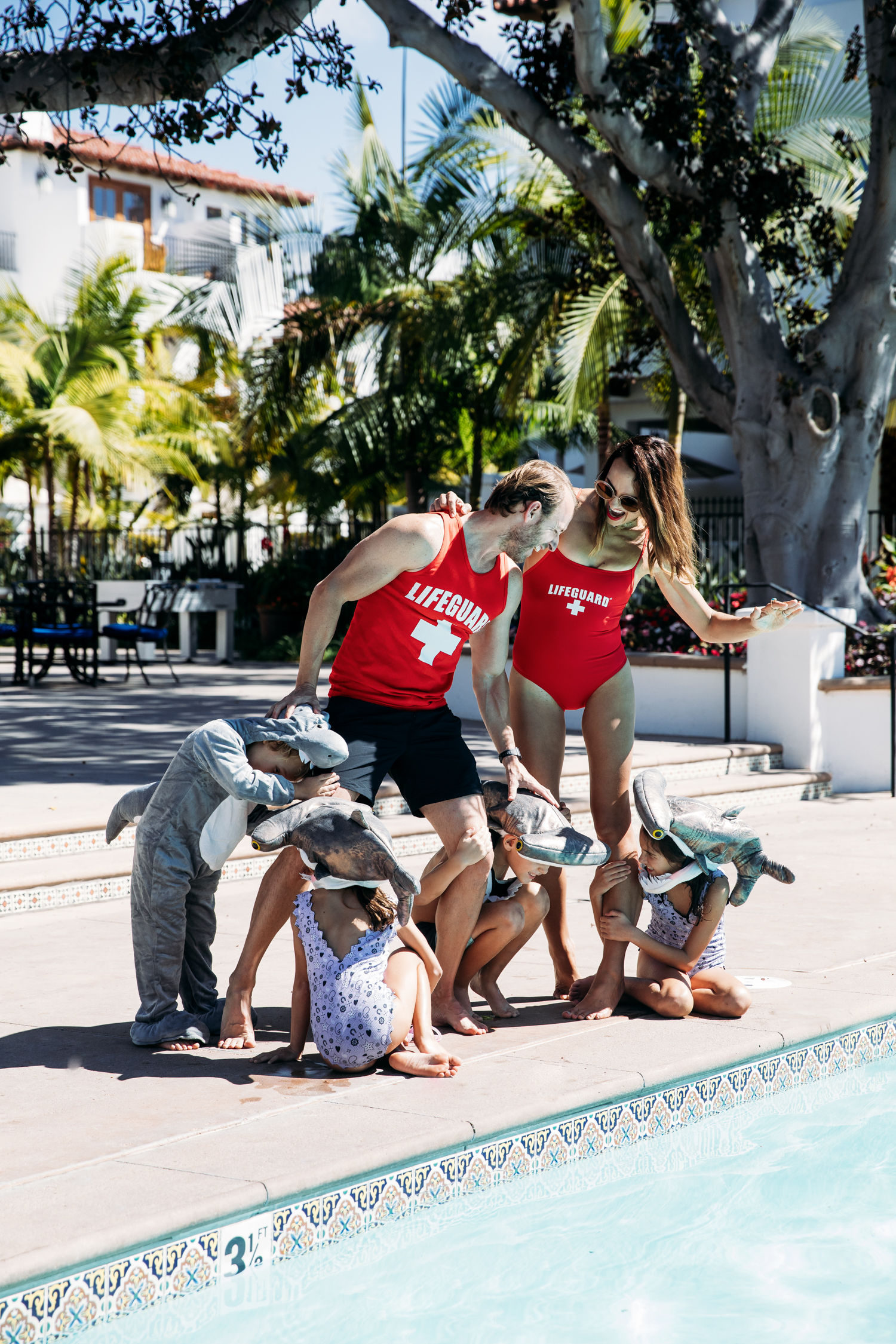 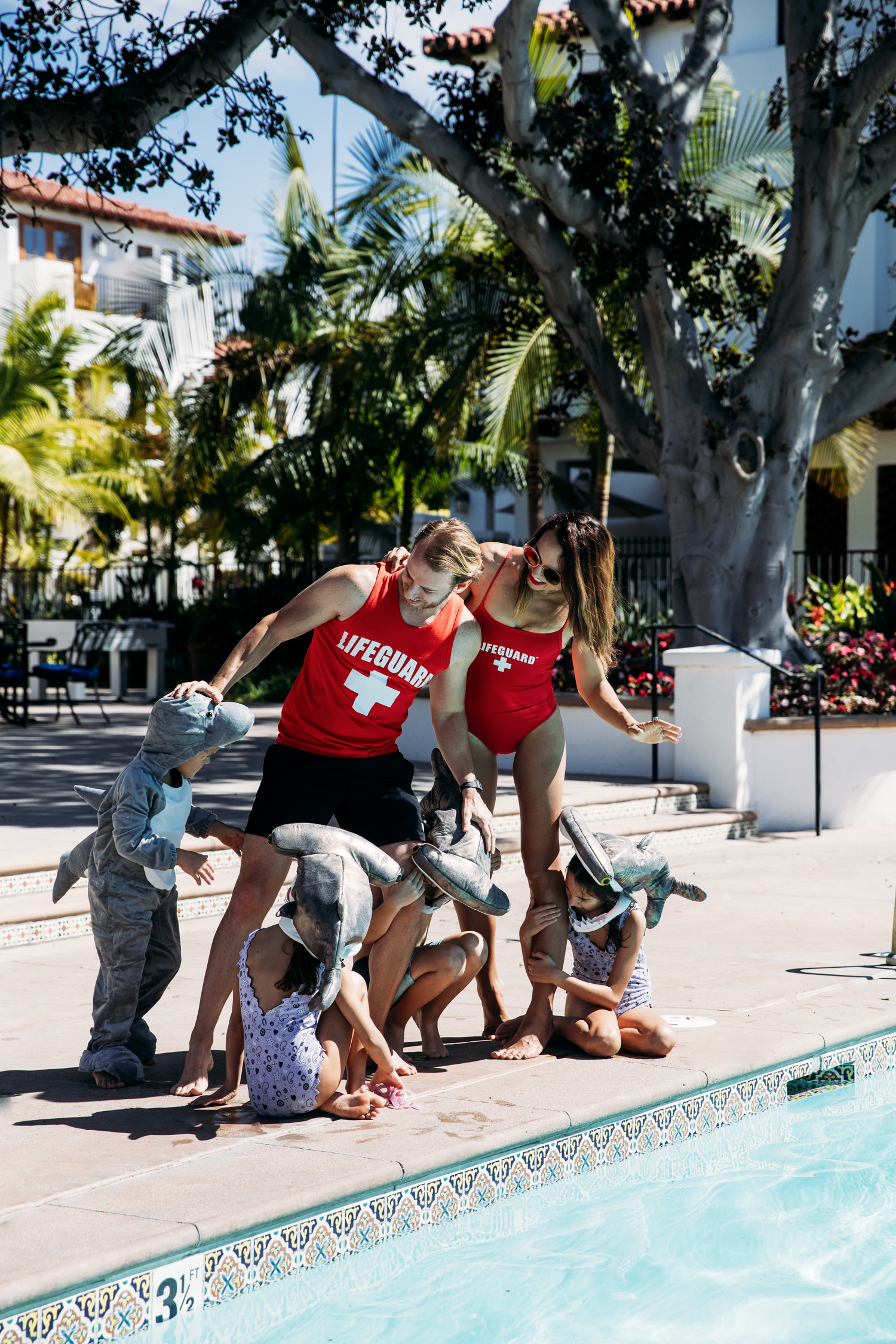 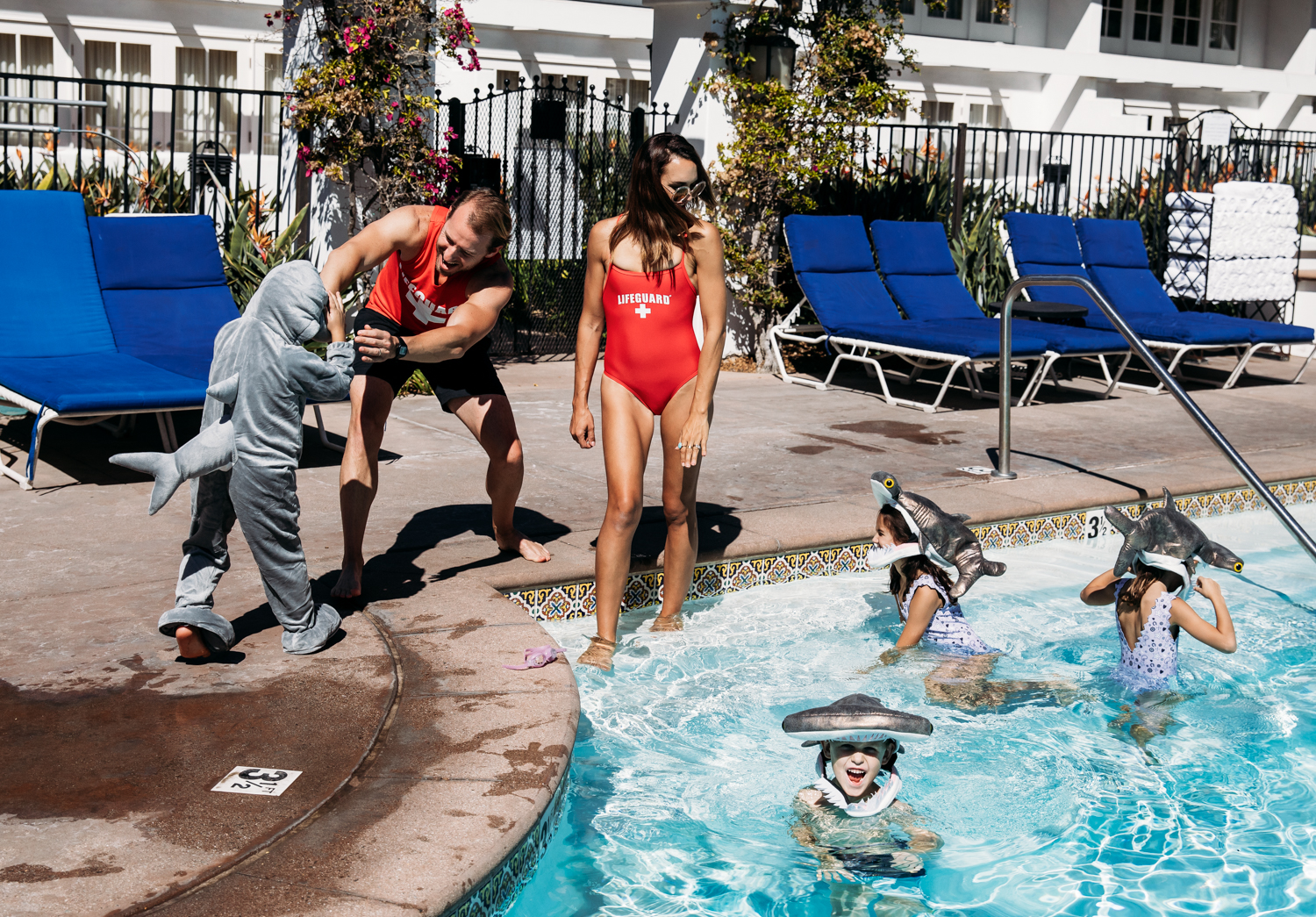 On a long ride to the country, we asked the kids who they think we should dress up as for Halloween. We usually like to keep things streamlined within the family. First option was Pocahontas, next was lifeguards. Not a huge surprise coming from our 7 year old who was helped by a lifeguard in Laguna Beach a couple months ago when she hit a rock underwater and gashed her chin. Long story short, she got 5 stitches and we had a solid 2.5 hour drive home. Maybe it was the first responders on the beach that convinced her we should honor them by dressing up as them, who knows. But I do know I love this hunk of lifeguard (who actually was a lifeguard in his teens!) and these flesh-eating, candy-loving cuddly sharks more than life itself. So much so that I didn’t even mind having an audience when we shot this at the Omni Hotel La Costa. Who cares when you’re having fun right? Lifeguards it is!

What will you be for Halloween? See our last years looks HERE!

Get the lifeguard look here: 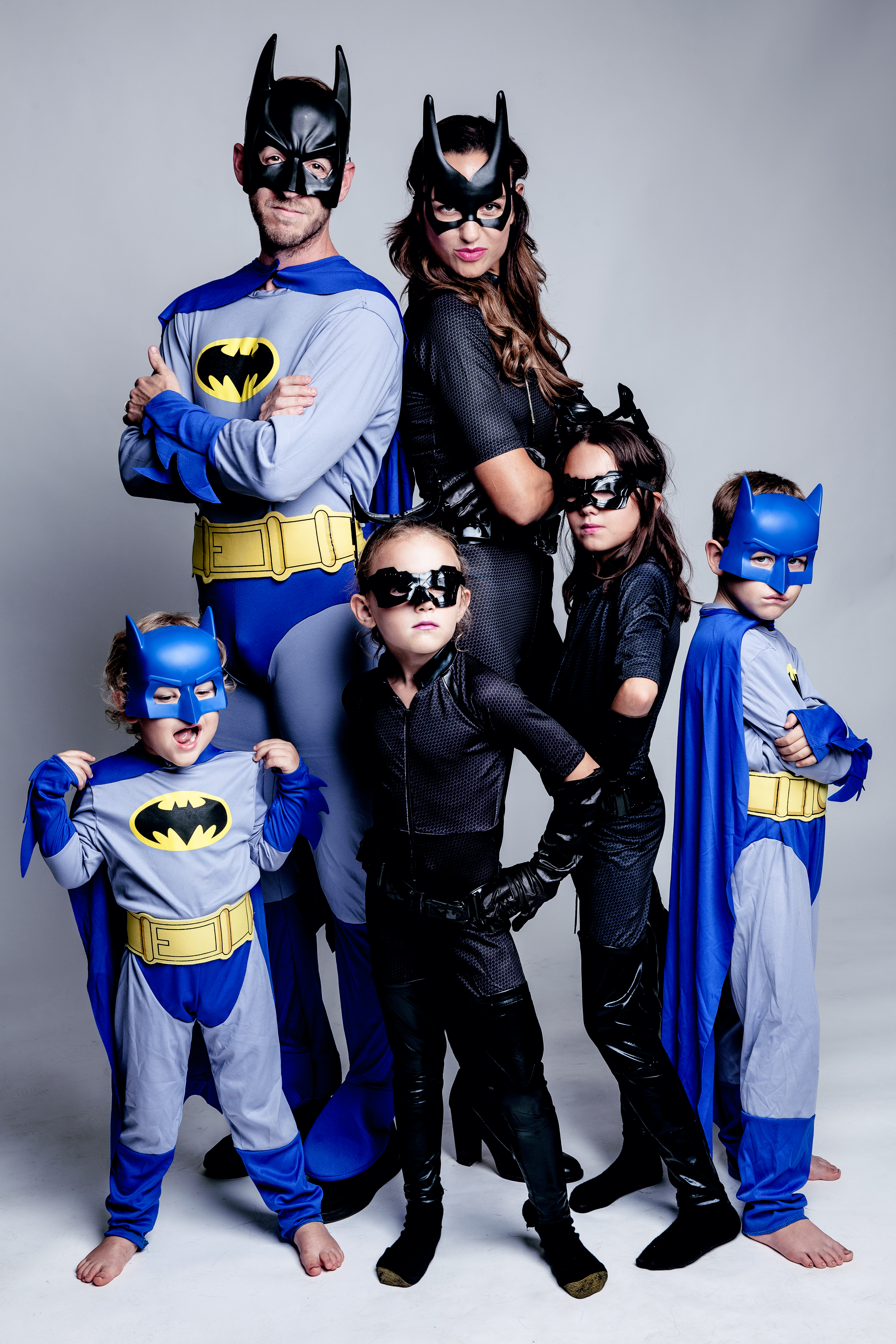 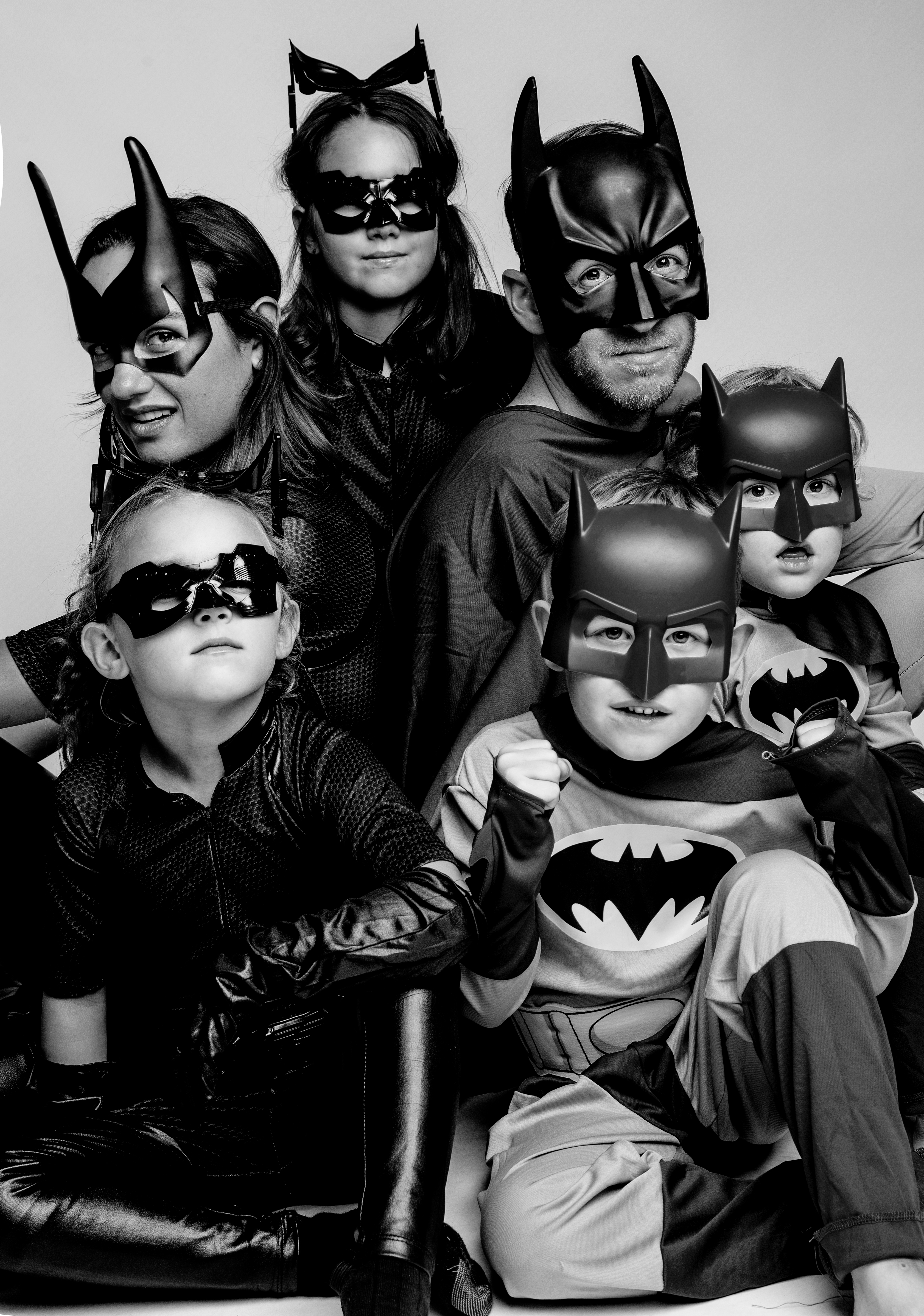 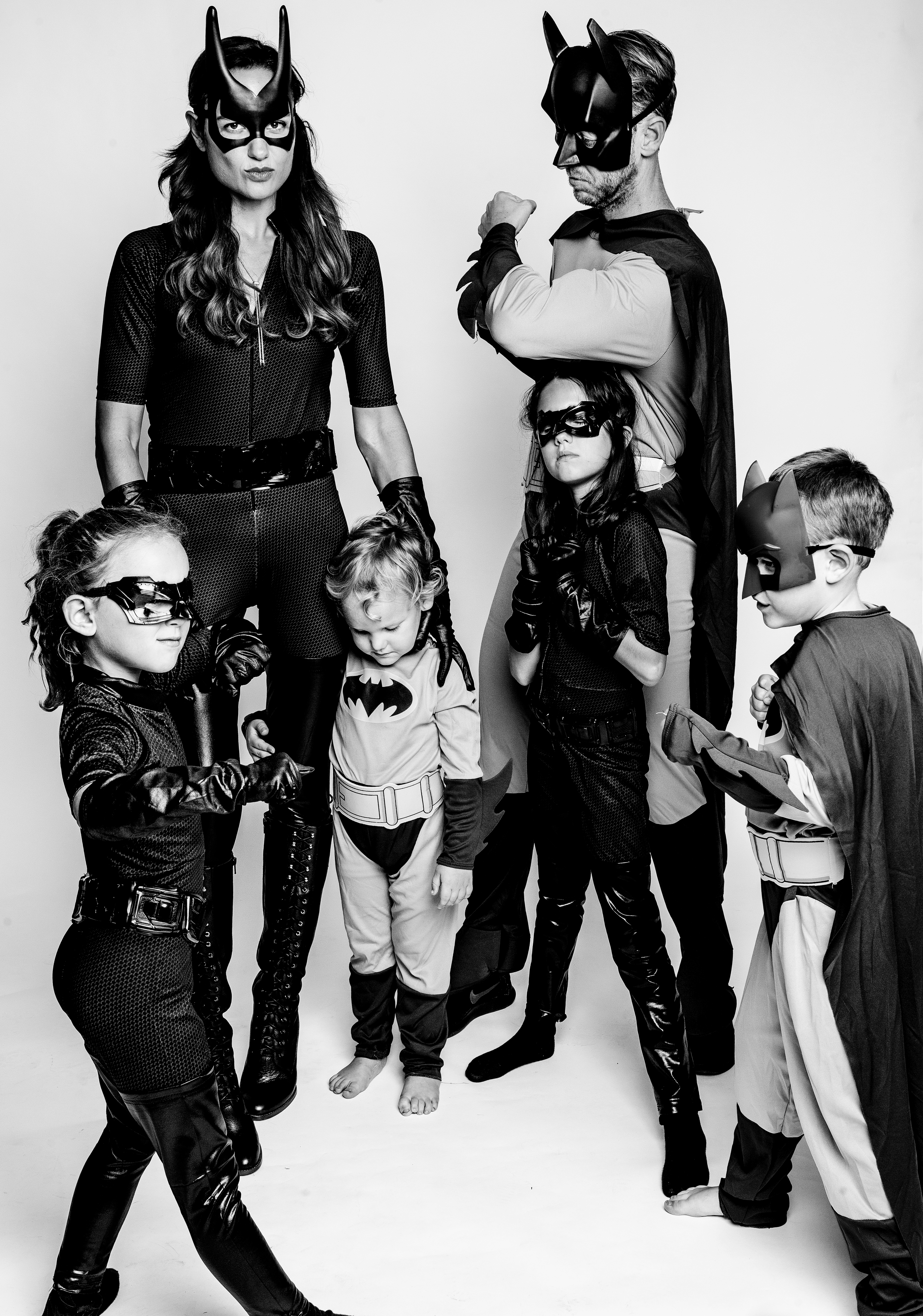 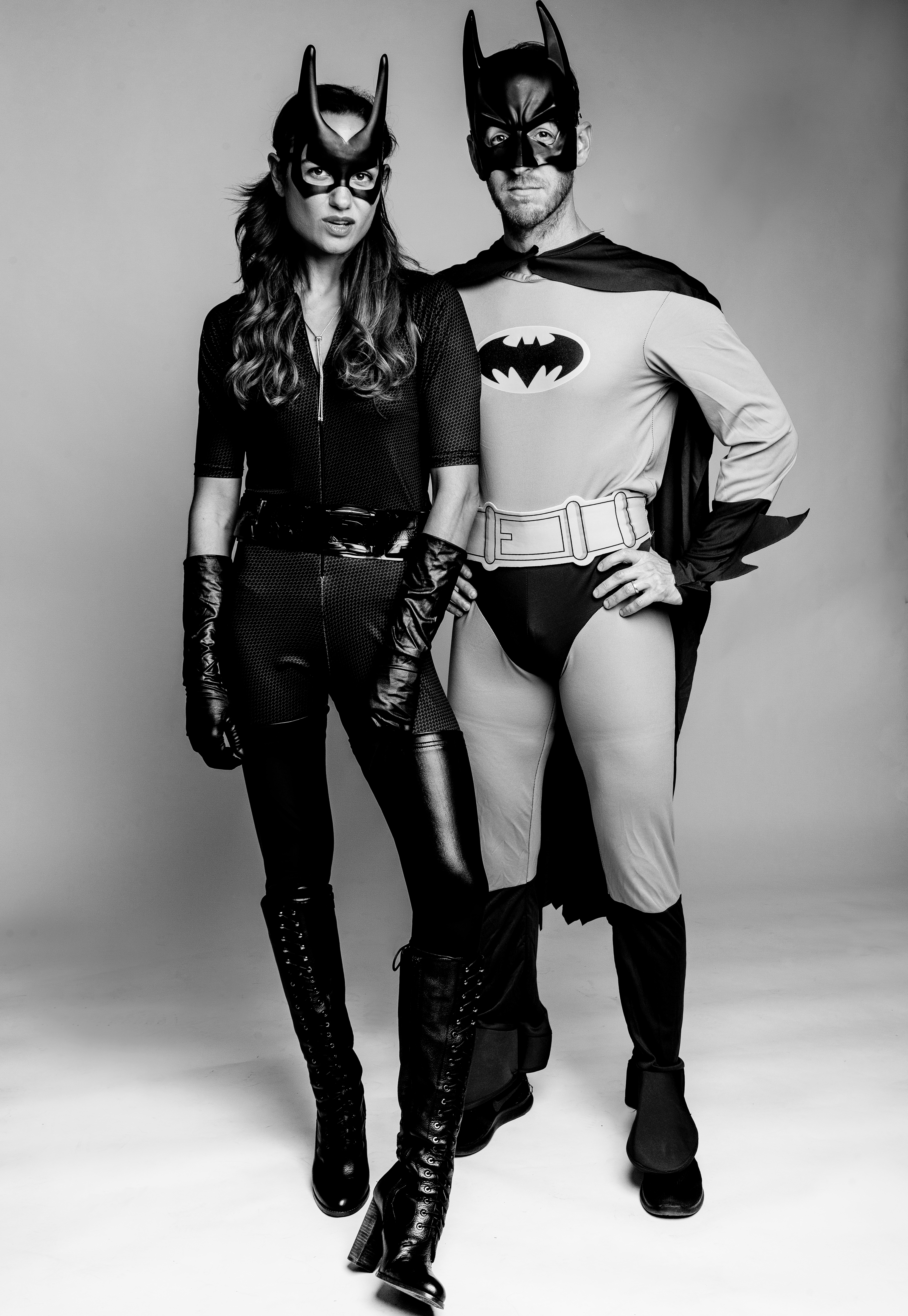 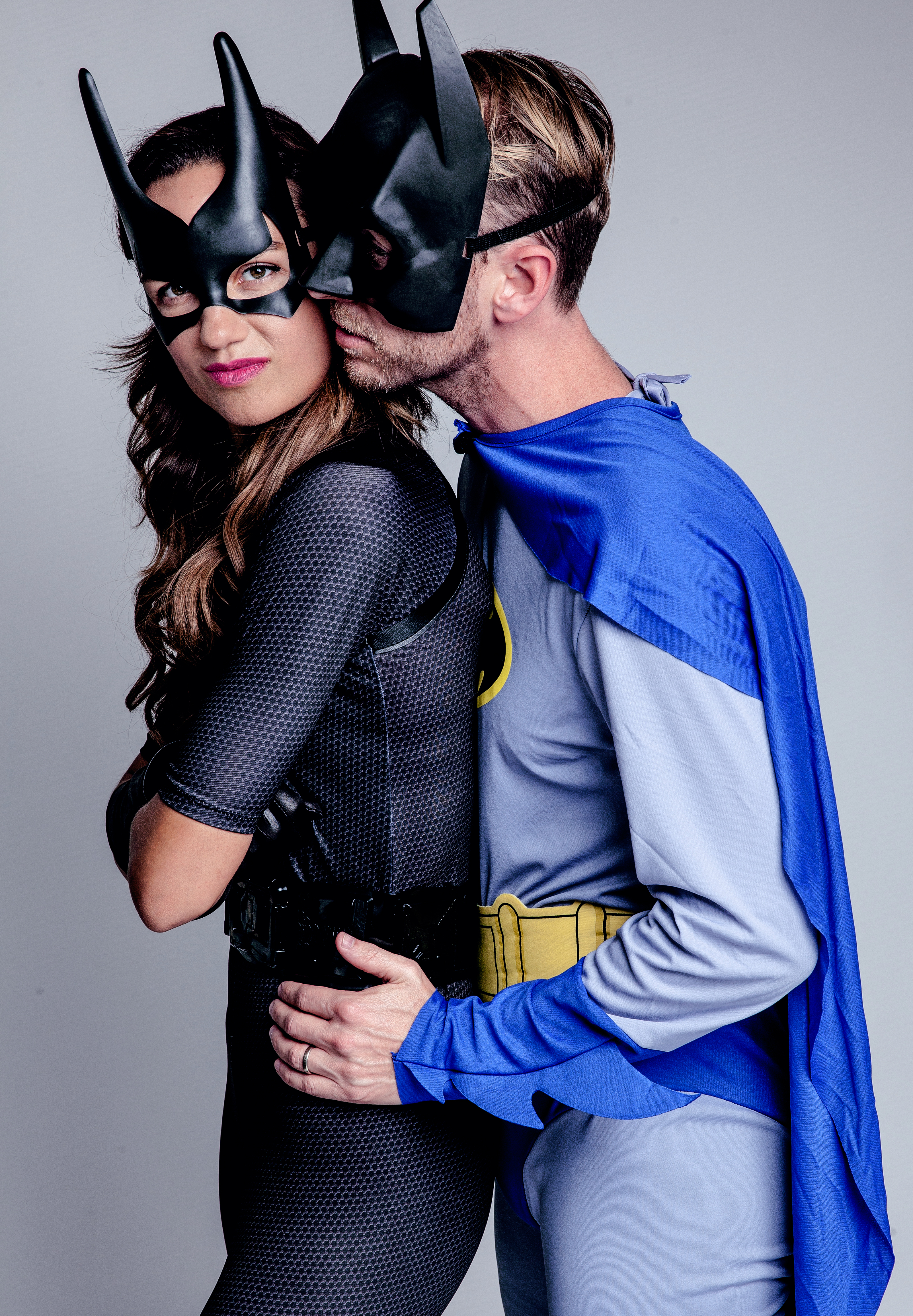 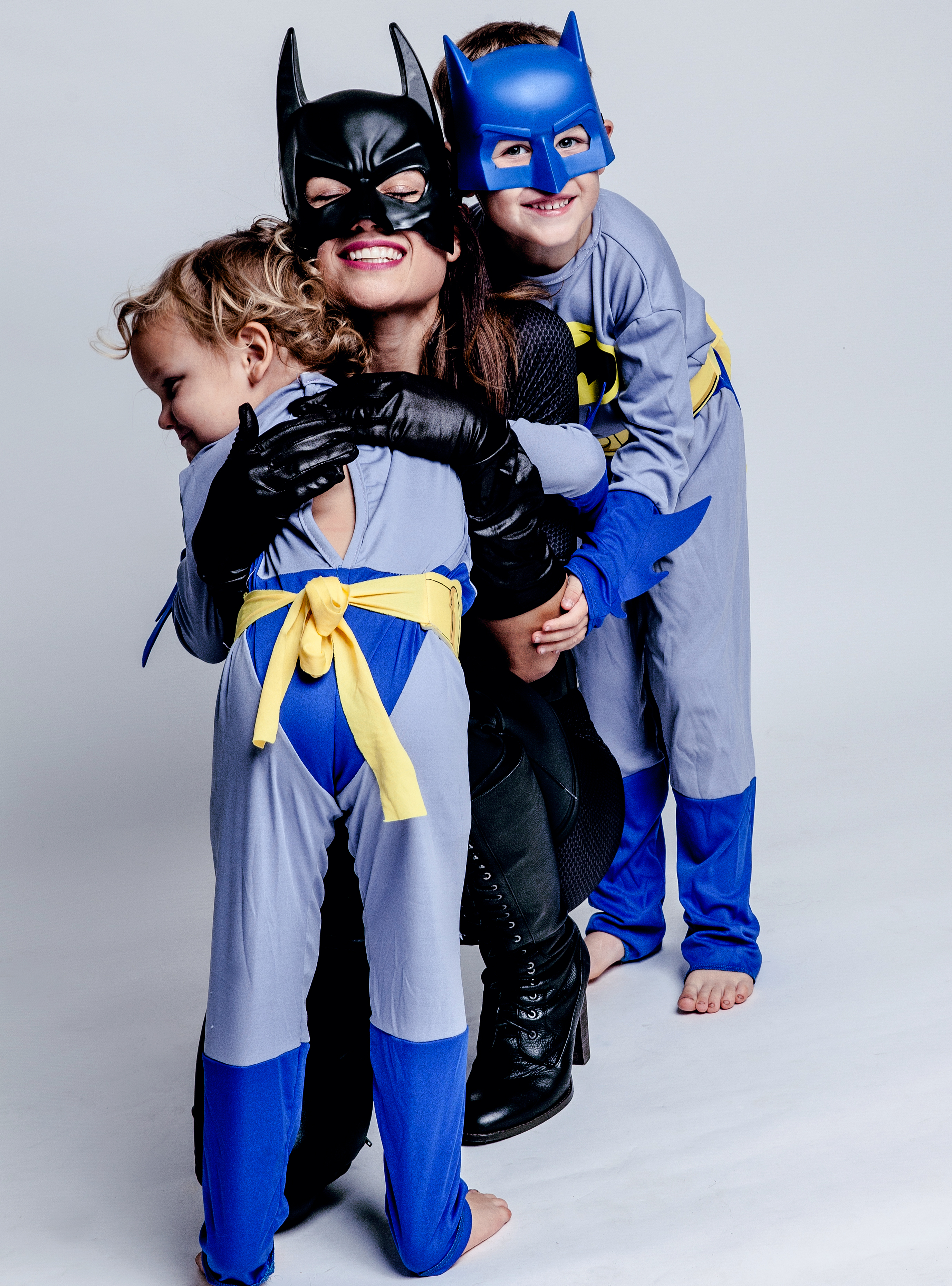 One of the many reasons I was so excited about leaving the Midwest was a warm October. I mean, Elsa and Anna can actually walk down the street without a full parka and knit hat? Mind-blowing. So to celebrate this inaugural year of Costumes without Coats, the girls and I decided on Batman’s right hand girl: Cat Woman. We had soooo much fun getting dressed and it wasn’t long until the kids were begging to go outside to show off their costumes and demanding pictures (no, you read it right. They wanted pics!). I’ll admit, I’m the mom who is AWFUL at costumes – to the tune of using the couch blanket as a cape. Yup, mom fail. This year, I did away with my old ways. Despite ordering multiple Cat Women costumes, the totally corny headband, and the slightly loose boys’ costumes, ol’ Amazon totally pulled through for me. They, and I really do mean “I”, were a complete success. Let the 88 degree Cali October-trick-or -treating begin!

Shop our looks here and on my shop page. What’s your favorite costume of all time?